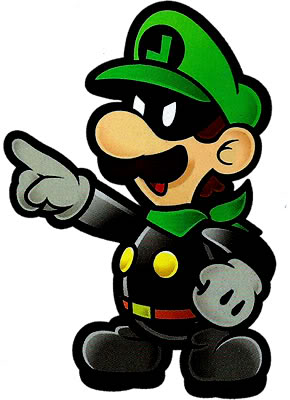 Character Information: Dark-Luigi is a rogue member of the Luigi Man tribe (you may recall that LuigiMan200 is as well).  He was created when a mad scientist tried to turn a normal Luigi Man into a powerful, shocking bio weapon using the Chaos Heart's power.  He succeeded, in a sense.  Dark-Luigi is much bigger than the average Luigi and possesses strange, dark powers.  However, he hasn't shown much interest in world domination (yet).  If you're his friend, expect to receive cool paintings and big plans from him.  If you're not his pal, then you might just be at the receiving end of one of his practical jokes.  He's a bit impatient and awaits the day that the world realizes how amazing he is.  Still, he's a loyal friend who provides good company.

Fighter Color: Dark-Luigi wear's the traditional green of his people.  However, he has also been seen wearing black armor and a bed sheet.

Signature Weapon: Dark-Luigi charges into battle with his beloved Cragalanche Cannon.  You'd best avoid it's powerful lava shots.  These aren't your Goompa's fire balls.  Though, for some reason, I imagined him using a Drill Arm...

Power of Flight: Dark-Luigi can fly using sinister bat wings that his power created.  However, they only last as long as he has the avatar showing them active.

Rivals: It is currently unknown if Dark-Luigi has a rival.  It is theorized that LuigiMan200 (now DreamyViridi) could be his competitor.

Trivia: Despite his size, Dark-Luigi is quite light, due to the fact he is flat like a sheet of paper.  He also has a layer of cel-shading. 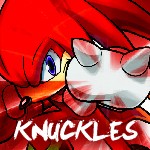 Great job on this True, but you either mispelled Dark, or I'm missing out on an inside joke.